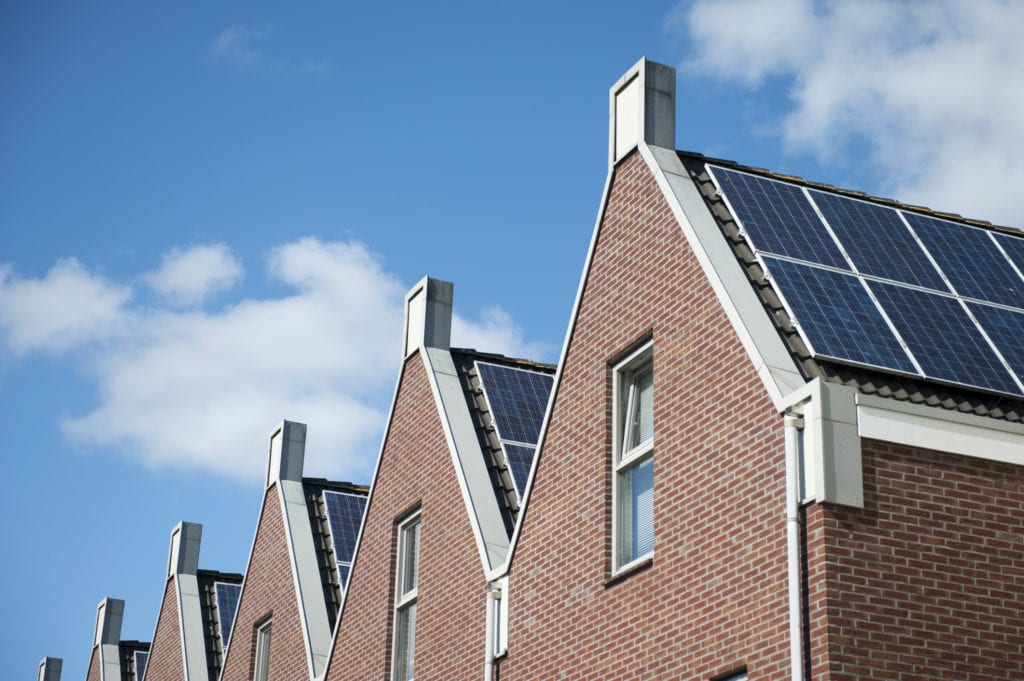 Using renewable energy to power your home has many useful benefits. You’ll be reducing your household’s impact on the environment and could also stand to save a great deal of money on your usual energy bills. And as new legislation comes into effect, it’s very likely that in the coming years homeowners will be further encouraged with repayments and tax breaks. Let’s take a look at what your various options are and how to use renewable energy at home.

What is renewable energy?

Energy that comes from natural and constant sources such as the sun and the wind is called ‘renewable’. This is because the sun is not going to run out any time soon, as opposed to energy which comes from the burning of fuels with a limited supply, such as coal or oil. The other key difference is that renewable energy is clean, whereas fossil fuels release harmful emissions as they are processed into energy.

To better understand how to use renewable energy at home, it’s important to look at the different types available and how they work.

Solar panels use energy from the sun to power your home. These panels are installed on the roof of your house or anywhere that gets constant sunlight. Pieces of light, known as photons, from the sun land on the panels, which are coated with anti-reflective material to stop them ‘bouncing off’. These photons are then converted into electrons and passed down wires into your electricity system, to be used in exactly the same way as power provided by UK electricity suppliers.

It’s important to note that solar panels work even when it isn’t hot and sunny as there are still enough photons falling through the air to make the system work. The electricity generated can be stored in batteries and if you generate an excess of electricity it can be sold back to the National Grid, saving you money.

Solar power has fast become the most popular form of renewable energy for home-owners. It offers many advantages, such as being relatively easy to install while improving the value of your home, not to mention it is rapidly becoming an affordable option for most property owners in the UK.

Heat from the sun

As well as providing power, solar energy can be used to heat your home. Using the same system of panels, these setups send the electrons into a tank of water to heat it up. This can provide hot water for your showers and baths as well as for your radiators.

You’ve heard about the UK’s wind farms, both offshore and based around the country, but did you know you can also get your own domestic unit?

Wind power works by the wind acting on the windmill blades, turning them round and causing a turbine to generate electricity meaning you can save money on your electricity bill by installing one of these units at home. However, they aren’t as popular as other renewable methods as installation costs are high and they need to be placed in a location that experiences plenty of wind.

The heat of the air itself can be converted into energy for heating your home. An air source heat pump sucks in hot air using a fan-like machine, working in a similar way to a fridge but in reverse. Once this is heated, an electric system compresses the water to heat it up further, and it can then be stored and sent into your plumbing system to be used.

Because much of the heat is coming from the hot air itself, and the rest is produced using electricity, it is much better for the environment than using burning oil to heat the water.

Rather than being a machine or a kind of technology, biomass is a form of fuel but instead of burning coal or oil, you use wood chips or paper. There’s much less carbon in these materials so when they burn the carbon impact is greatly reduced.

The reason why coal and oil were used in preference to wood was originally to do with efficiency but modern technology now allows a similar level of efficiency when burning wood and similar non-fossil substances. The most obvious example of using biomass is when using firewood in a fireplace to heat your home. However, you can also use biomass to power an electricity generator to provide power for other applications and units exist which burn wood or paper much more efficiently than a standard fireplace.

Whenever water is falling further than one metre, it moves fast enough to power machinery. This has been used for centuries in waterwheels that power mills and can also be used to power hydroelectric dams where the water turns a turbine to generate electricity. The key requirement is water falling further than one metre so if you live near a river you can set up a small hydroelectric system that works on the same principles. The water may not even have to be on your property – consult with your local authority and you may find you or your neighbours have permission to install a system on nearby land.

Many energy suppliers are starting to source some or even all of their electricity from renewable sources such as wind, biomass and solar. Some companies even offset the environmental damage caused by their use of gas, so it’s possible to have ‘clean’ gas too.

When looking at how to use renewable energy at home, it helps to be aware of all the alternatives. Some options, such as hydroelectricity and wind turbines, might not be suitable for your particular property, but advances in solar power mean that this can be an effective and affordable possibility for many home-owners. This type of renewable energy is fast-outgrowing old, harmful sources of energy such as coal and oil, and offer the advantages of lower energy bills as well as helping preserve the environment for future generations. The sooner you make the move towards learning how to use renewable energy at home, the quicker you can start receiving the benefits.

Find out how solar could work for your home by speaking to our team today.