For many workers across the UK, the shape of their commute has changed beyond recognition since the COVID-19 pandemic hit in March 2020.

Unless you were deemed a ‘key worker’, the majority of businesses were forced to close their offices and employees were ordered to work from home.

Since then, many of the UK’s workforce has started making their way back into offices up and down the country.

But what does commuting look like in cities across the country – and what impact does this have on the environment?

We surveyed members of the British public to find out their attitudes towards commuting.

How does your city shape up in our findings? 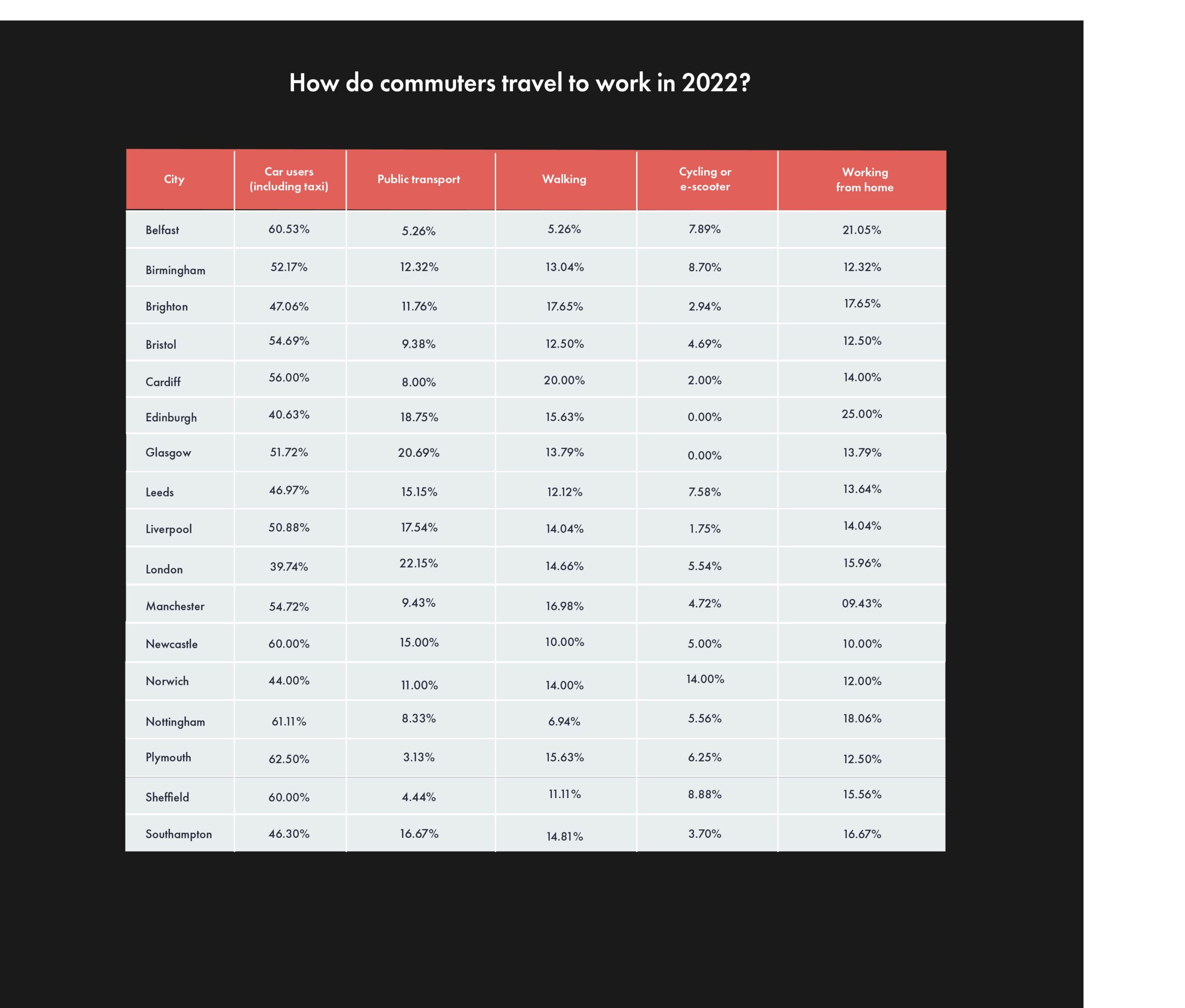 How do different cities get to work?

According to our survey, using a car to commute is still the go-to choice for the British public.

Plymouth is the biggest culprit for car use, with 62.5% of residents using their vehicles for the commute.

Cardiff residents are more likely to commute on foot, with 20% of those surveyed saying they walk to work each day. This is markedly higher than in Belfast, where just 5.26% of residents cite walking as their preference.

Working from home is still a popular option for the British public, with 21.05% of Belfast residents still being predominantly home-based to work.

What does your commute look like? Get in touch with us on social media to tell us!

What is the average commuter distance?

12% of commuters travel less than a mile to their place of work, compared to 10% pre-pandemic.

In environmental terms, commuting 10 miles in a mid-size petrol car creates 5kg of carbon per journey. Over a year of commuting, this equates to 1305kg of carbon emissions per car!

When comparing commuters who used their car to travel to and from work before the pandemic with today’s data, the results are stark.

Car use for commuters has remained largely unchanged, with 52% of those surveyed using their car before and since the pandemic to get to work.

In positive news, those walking, cycling or using an e-scooter to get to work has increased post-pandemic. 13% of the public surveyed cited the eco options as their choice when commuting in 2022, compared to 10% in 2020.

The use of public transport has decreased post-pandemic too, with just 5.26% of those surveyed using a bus or train to get to work, compared to 13.16% in early 2020.

Taking the train to work is hugely beneficial for the environment. Swapping your motor for the train can reduce personal emissions by up to 74%.

How can commuters offset their carbon emissions?

Commuter miles by car, bus and train continue to contribute to carbon emissions in cities.

54% of the British public wish there was an easy way to offset their carbon emissions caused by their commute.

Of those surveyed, 50% said they continue to choose to work from home as a way to offset their carbon emissions.

When surveyed, 46.71% of the British public think those who commute by car, bus or train should invest in solar panels to offset their carbon emissions caused by commuting.

Over 50% of those surveyed said they would be interested in buying solar panels for their home to offset their commuting carbon emissions.

Solar energy produces low emissions and is a great way to reduce the carbon footprint of your household.

A solar PV system could reduce carbon emissions by 1.3-1.6 tonnes per year, this is equivalent to a medium-sized petrol car driving 3000 miles.

Get in touch with us today to start your solar journey.