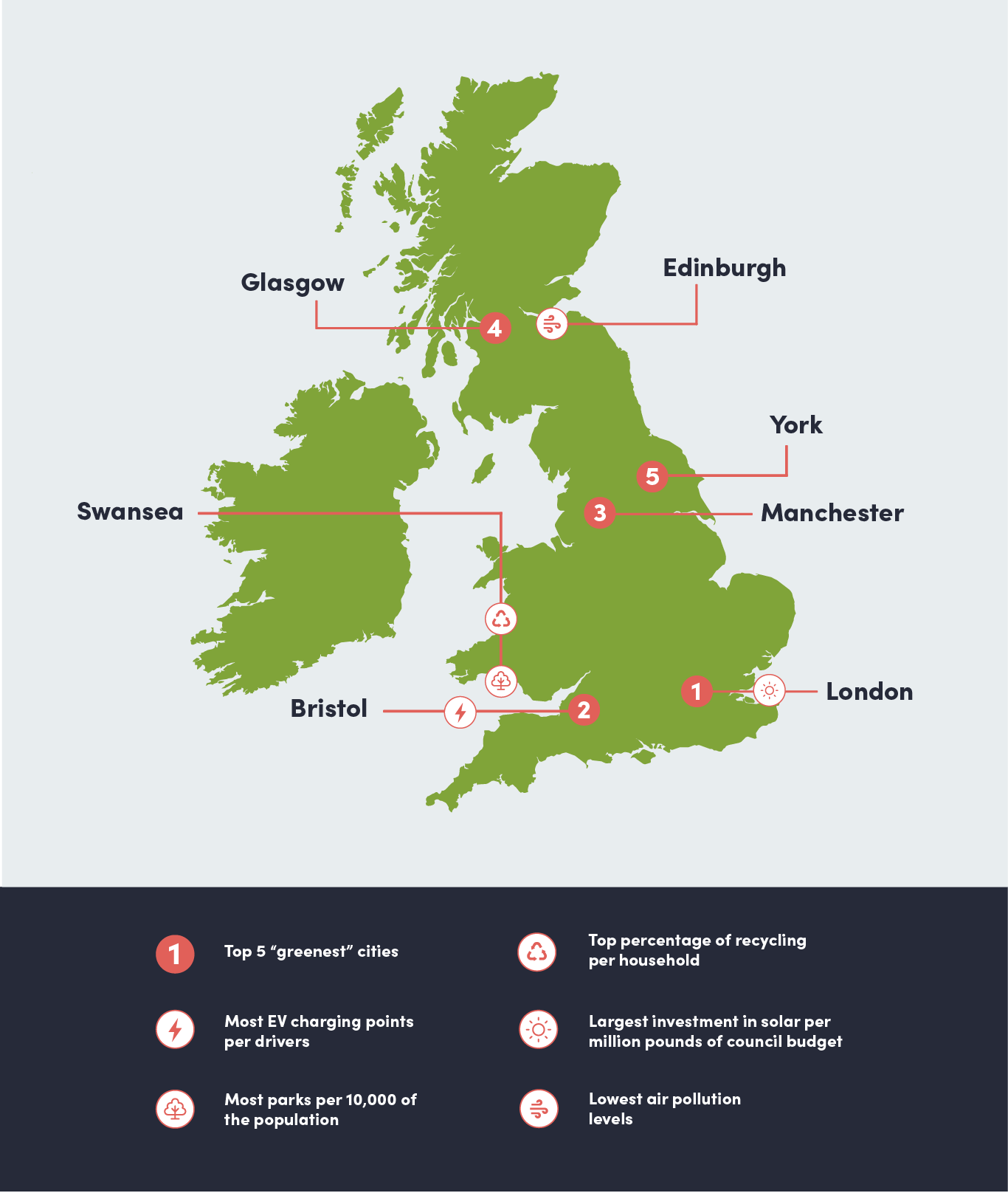 Global lockdowns may have cut carbon emissions by 7%, but global warming is still a very real problem. With net zero emissions set as the target for 2050, cities across the UK have a big role to play in becoming more sustainable.

We’ve analysed locations up and down the country, and put together a list of the “greenest” cities in the UK.

London made the first place, whose investment in solar outshone the rest of the cities at £149,126.52 per million pounds of council budget. The high ratio of green spaces per 10,000 of the population, and availability of EV charging stations also contributed to its place at the top of the leaderboard.

Bristol was not far behind, with the most EV charging points for drivers, at only 914 drivers per charger. To give a comparison, Birmingham EV drivers have to battle it out, with 6,997 of them per charging station. The high percentage of household recycling, and substantial investment in solar also made it a top contender in our list.

Rounding out our top three is Manchester, with a large number of parks per 10,000 of the population at a ratio of 2.92, and it’s investment in solar moving it slightly ahead of those below in the leaderboard.

How did we calculate the scores?

We evaluated the UK cities based on the 4 categories:

And, within these categories, we analysed:

Green spaces available, analysing parks per 10,000 of the population. The number of parks were taken from each local authority website.

EV charging provisions, analysing the number of EVs per charging point with the lower the figure representing the better the provision. The data was sourced from Uswitch.

Investment into solar energy, judged by the investment per million pounds of council budget. Investment includes any expenditure on construction or maintenance of any new or existing solar energy projects.

All information for investment, energy produced, and number of PV fitted buildings was received by FOI request to city/borough councils carried out by thesolarcentre.

We also looked at household recycling efforts: the percentage of household waste sent for reuse, recycling, or composting for each city. This data was sourced from Waste Data Flow.

Having gathered data on this criteria, we ranked the cities from 1-15 on each factor, and then an average was taken from the scores. For the cities which averaged the same, a weighting was added to ‘solar investment’ given Project Solar’s mission, and this produced the final ranking scores!

As we all work together to achieve net zero emissions by 2050, we’ll be keeping an eye on progress of the cities across the UK, and particularly the growth of solar.

Are you thinking about making the switch to solar power? We’re on a mission to bring solar to homes across the country. Get in touch with our team for more advice and information.