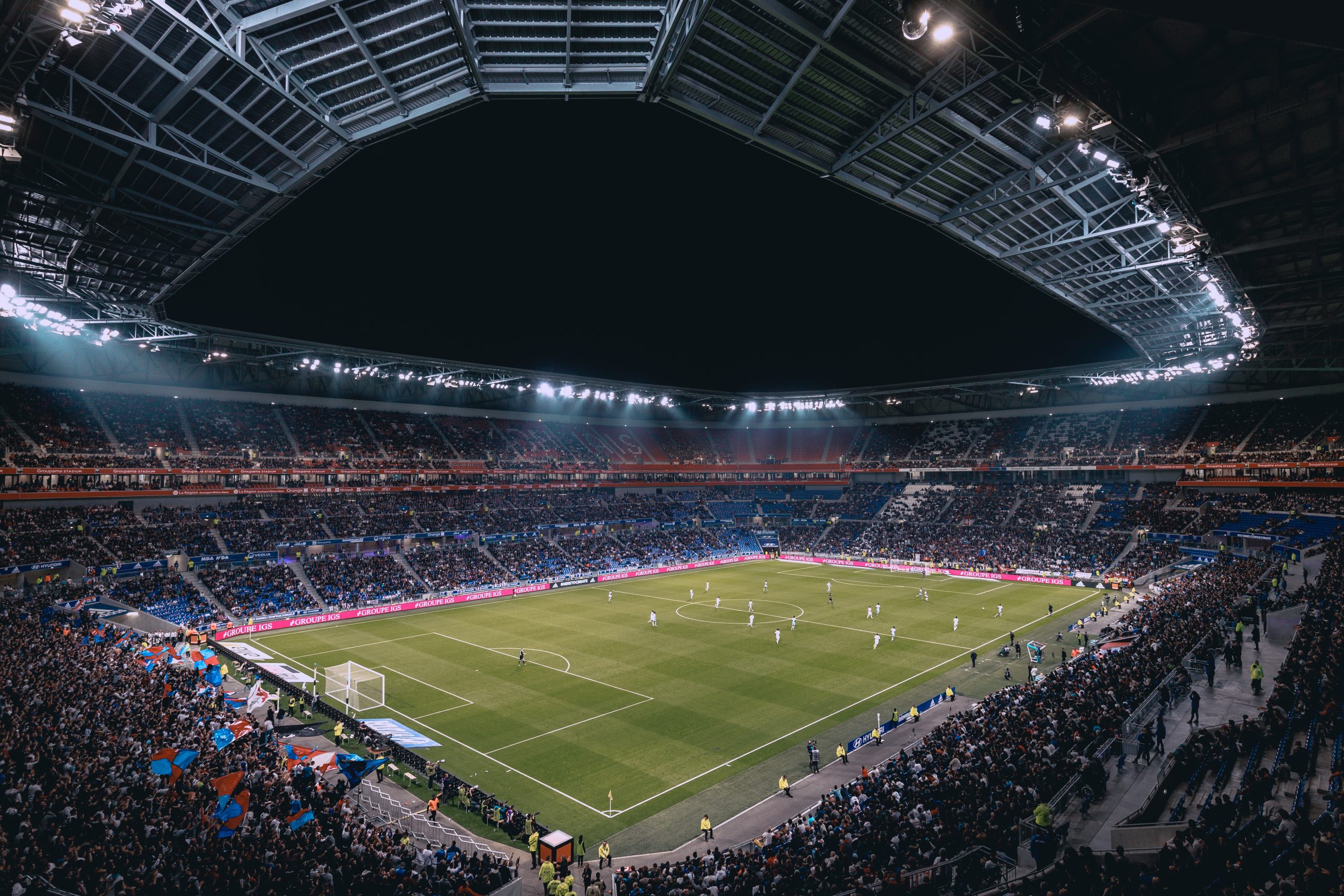 The 2022 FIFA World Cup has provided the world with entertainment far beyond expectation. Without the usual summer beer garden buzz surrounding this tournament, nobody was quite sure what to expect.  One thing is definitely for certain, players around from around the world delivered some of the best games of football in recent years, making for a tournament that will surely go down in history for granting some of the greatest players in history a fitting swansong to their international careers.

From Japan beating Spain and Germany in the group stages to Morocco knocking out Portugal in the Quarter-Finals, this tournament has been full of surprises (we even hesitate to mention the eventual champions losing their opener to Saudi Arabia). Alongside the surprises, we were treated to some of the greatest football on the biggest stage, with Mbappé scoring a hattrick in the final and still losing to Argentina. What isn’t as much of a surprise is the sheer athleticism that was on display over this world cup. With players performing above and beyond their normal standard for their country in climate conditions football is rarely played in. It will come as no shock to learn that the players at this tournament produced a staggering amount of energy.

So who did the most over the tournament? In terms of distance covered and energy burned as a result, it was Morocco’s Sofyan Amrabat. Having played for a total of 11 hours, Amrabat ran the distance of almost 2 marathons. The 24 year old Fiorentina star has impressed clubs over his World Cup campaign, with Morocco reaching the Semi-finals of the competition partly thanks to his superb running ability. 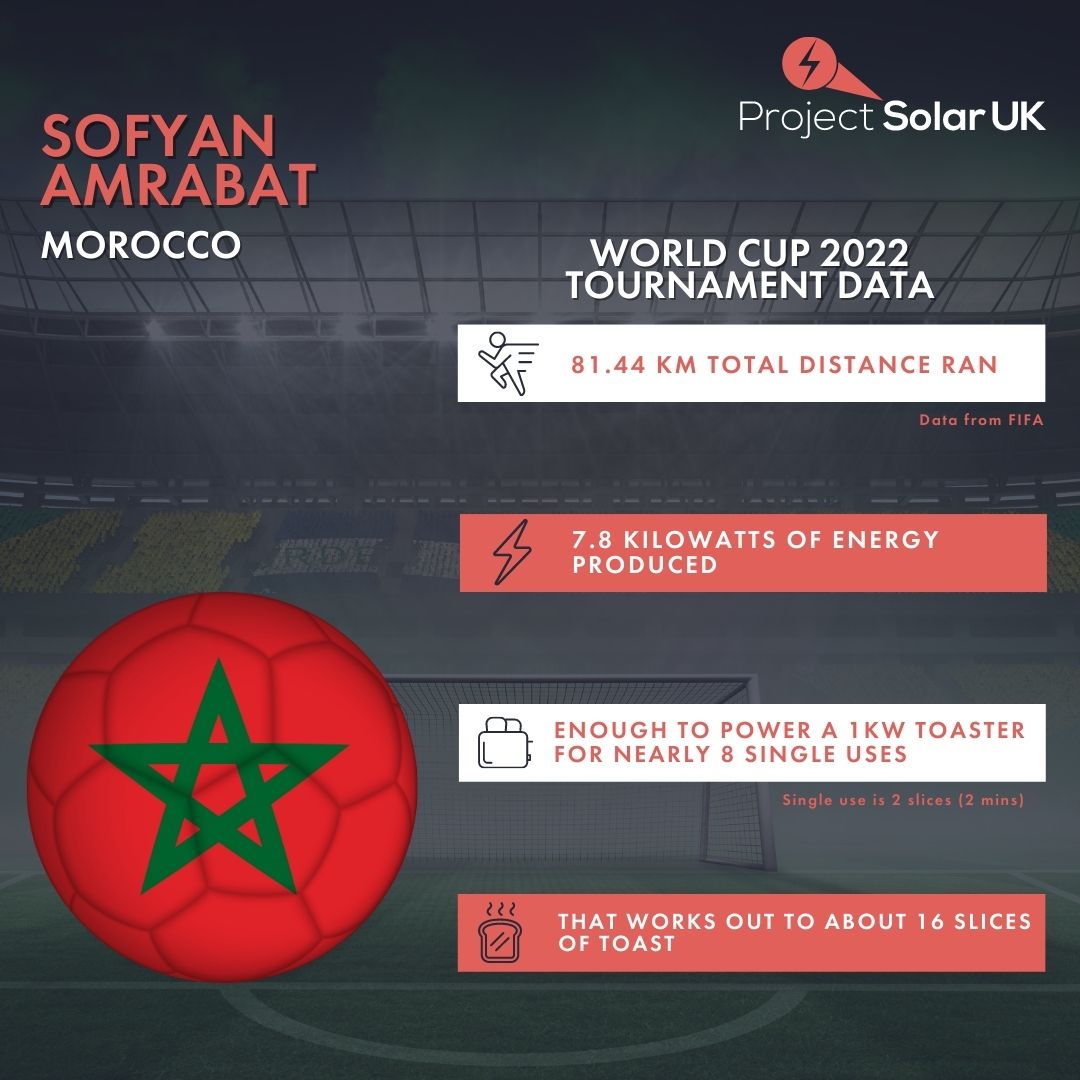 16 slices of toast. You don’t need a scientist to tell you that that is not enough calories to power a human for 11 hours (especially when they’re running at an average speed of over 7 kmph). So why so little? It’s not a statement on the amount of work done by Amrabat but more so the amount of power needed for a household appliance many of us take for granted. This would take a home with 4 solar panels (each generating power at around 300Wh) around 7 hours to generate on average. Considering the panels aren’t having to battle with Bruno Fernandes and Antoine Griezmann to generate this power, we think it’s a pretty interesting statistic.

So how did we do it? Using data published by FIFA after each game in the knockout stages we were able to estimate the number of calories burned by the players based on the overall distance they had run. These calculations also took into account the players’ height, age, and weight to achieve the most accurate results possible. This then allowed us to convert the kCal figure into watt hours, which is used to measure the power usage of appliances. From there it was just a matter of seeing which appliances could be powered and for how long.

Whilst it’s all well and good looking at running stats, that’s not the total picture of the energy players put into the game. There’s the walking they do between runs, lateral movement to avoid other players, and of course the obvious kicking the ball. Over the years as technology has advanced in the public eye in terms of renewable energy, so has sports technology. This makes it so that the top performances we have seen in history are happening right now. An example of this is Lionel Messi’s fastest free kick, clocking in at a top speed of just under 145 kmph. For reference that’s almost 30 kmph faster than the top speed of Marcus Rashford’s goal against Wales in the group stages of this year’s tournament. 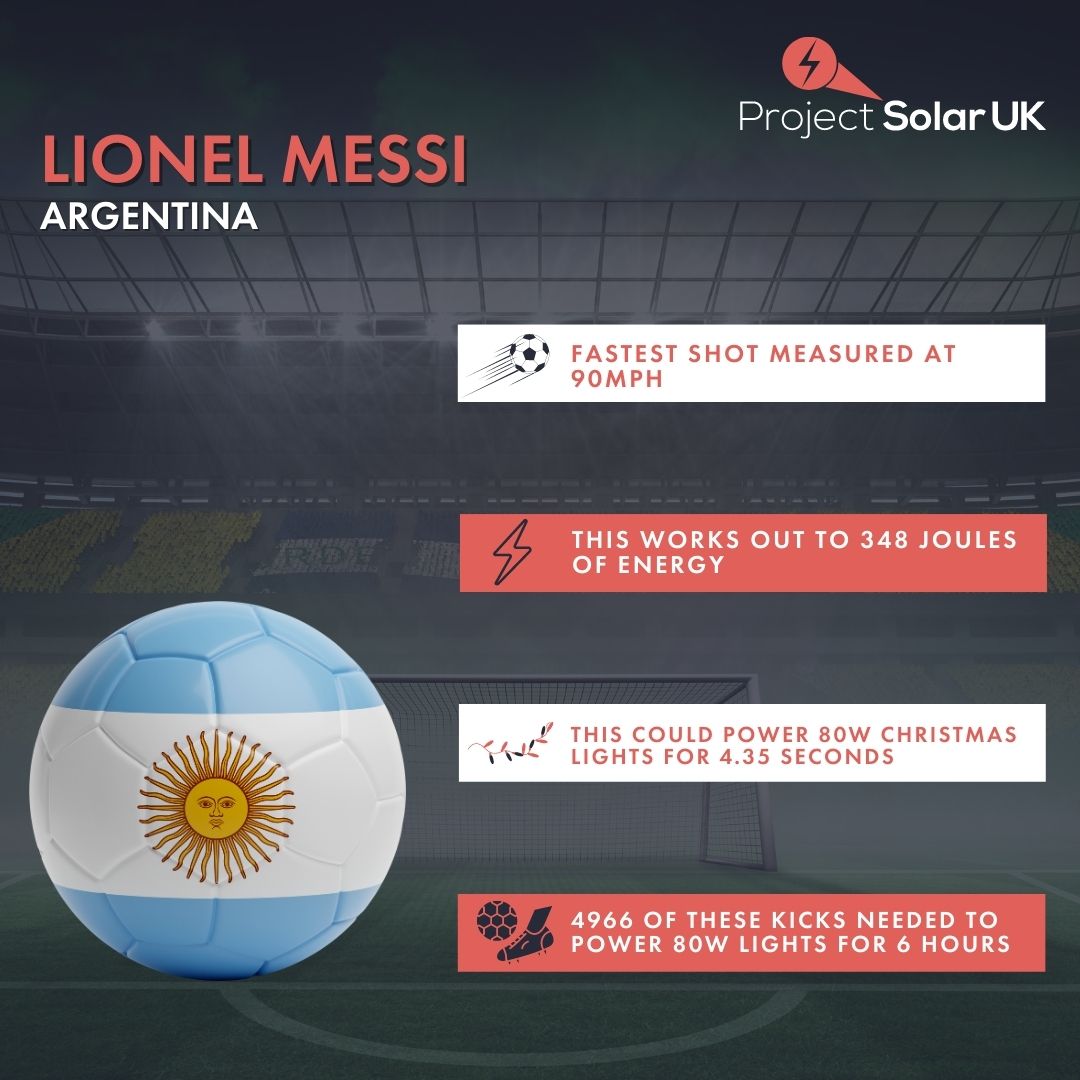 What can we do with this information? Similarly to the distance ran by players, we can convert this data into figures relating to power. The graphic shows how the energy Messi put into the ball at its top speed of 145 kmph can power a set of Christmas lights for just under 5 seconds. While this may not sound like a lot, it is important to consider two things; this figure is just from an instant where the ball is at its top speed, and not all of the energy from the kick will go into the ball as some is lost along the way.

All of the statistics we posted during the tournament are available on our Facebook, Twitter, and LinkedIn pages. We highly recommend you take a look as you’ll probably be surprised by some of the results. As we’ve talked about earlier, the energy used by the players to run during the tournament is incredible, and what is even more impressive is that you can generate similar amounts of energy in less time by doing nothing, solar panels will passively generate power for you so you won’t have to worry about beating Mbappé in a one-on-one to boil your kettle each morning. As the 2022 World Cup has come to an end, so does this campaign. Are you excited for the Women’s World Cup next year? We know we are.

If our stats have piqued your interest in solar panels, and you’re thinking about installing them in your home. Contact us today and find out how solar panels can help you reduce your carbon footprint and save money on your energy bills.